Twenty-three years old and in my last year of business school I went on a study exchange to a university in Nice, France. I had visited Nice while backpacking through Europe with a friend of mine and had immediately known that I wanted to go back.

Our first photo together, taken by my mom in October 2005

Only a few weeks into my exchange, the professor of one of our classes proposed to bring us to do a live study on a local business, a 5 star hotel just outside of Cannes. “Would any students be interested in doing an audit of this hotel in exchange for a night at the hotel?” Ummmm , YES!!!!

I still remember that I was the first in the class to thrust my hand up. This sounded right up my alley, luxury hotel, fine dinning restaurant, beautiful surroundings, who wouldn’t say yes to that? A few weeks later we were a group of 7 international students from a variety of countries to arrive at L’Auberge de la Vignette Haute hotel in Auribeau Sur Siagne. Nestled into the hillside at the entry of a medieval village 20 minutes from Cannes sat this beautiful boutique hotel that looked like it belonged in the 17th century. Truly, it was decorated down to the smallest detail as a medieval castle. We walked up a gravel path surrounded by vines and admired the swimming pool with its archways that resembled a roman bath. The view over the vineyards in the valley took my breath away. It was a warm fall day and already I knew I was living something quite extraordinary.

After checking into our rooms, it was time for us to earn our keep, we were there to create a report on how best to serve an international clientele after all!  As I had worked in restaurants back in BC, my role in the project was to study the restaurant and culinary offerings. To do this, I had asked to meet with the Executive Chef, Sébastien Giannini.

Le Chef and I met on the terrace of the restaurant for our interview. I shook his hand and got right down to business. Of course, I was taken aback by this tall, dark & handsome French Chef with a delicious accent, but I was there to do a job!

Afterwards, Sebastien told me that he fell in love with me at my handshake. I was asking him my interview questions in my broken French and he would comment on the color of my eyes… When Le Chef started talking about how he wanted to learn English and I offered that I really wanted to improve my French the flirtation was on! Sebastien asked to take me out to dinner that weekend, but I told him that I could not as my mother was to arrive from BC tomorrow and I would be spending the next couple weeks with her.  I gave Le Chef my phone number and we left it at that.

A couple days later, while my mother and I were visiting Chateau Neuf du Pape, I received a phone call from Le Chef. I remember looking at my mother excitedly when I received the call! “Would you and your mom like to come back and stay at the hotel?” Sébastien asked, “ I would love to cook for you”. 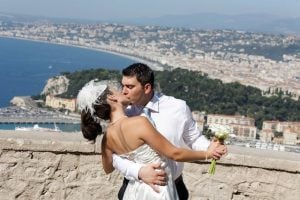 …and our love story was born. Needless to say Sébastien impressed the heck out of both my mother and I. He served up a 10 course meal that included foie gras poilée, seared scallops, Ribsteak served with its’ bone marrow and a cheese cart that I will never ever forget. All served within the most stunning medieval dining room, lit only by candlelight. After the meal, Sébastien and I sipped Cognac in front of the fireplace and got to know one another.

…This was the beginning of our story. You may wonder, how does a North American girl with high school French navigate life and love in the South of France? Well, dear friends, that is a subject for many a blog post.

Bonjour. If you are looking for French Recipes, made simple, you are in the right place! I translate the fancy cooking of my French Chef husband into easy-to-follow recipes that busy people with no culinary training, like me, can cook. From French Baguettes to French Riviera classic recipes, I invite you to learn French cooking with me.